Home  /  Acoustic Guitar   /  What difference does the fretboard material make to sound? 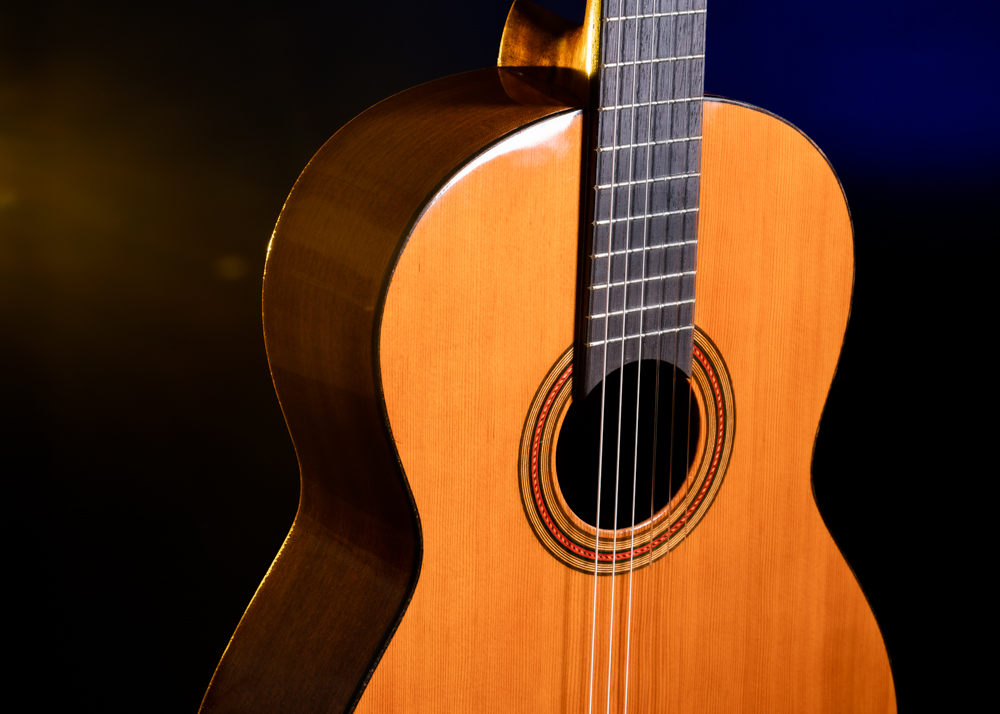 What difference does the fretboard material make to sound?

When I first started playing the guitar, I thought the type of wood used on the fretboard was just an aesthetic thing. I had no idea it made a difference to the sound of the guitar. 40 years on, I know better and I’d like share what I’ve learned.

Just before I get into the difference the wood on the fretboard makes to the sound, I want to chat briefly about the materials used in the guitar manufacturing process today.

I’m sure you already know, there are several different types of material (mostly wood) commonly used for fretboards on acoustic and electric guitars and basses, and they all have their own distinct characters.

In recent years the Convention on International Trade in Endangered Species of Wild Fauna and Flora (CITES) has restricted the use of Rosewood and Ebony in guitar manufacture and whilst this has been relaxed for some species and in some countries, many guitar manufacturers now use alternatives.

Today, the woods most commonly used for fretboard manufacture include: 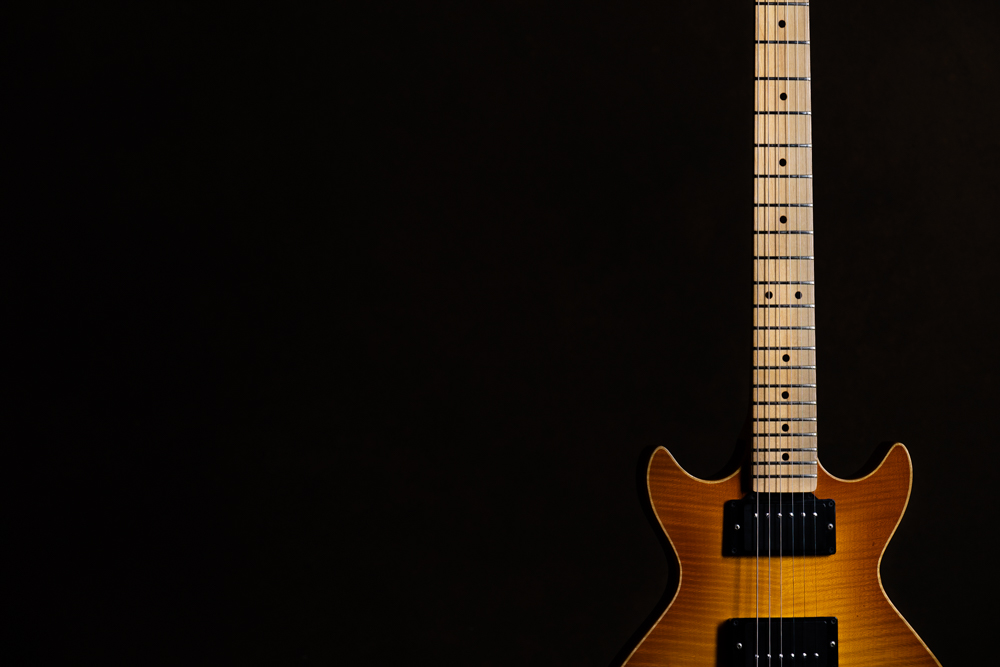 Maple is a dense hard wood with a thin grain that can look spectacular with flames and birds-eye figuring. Manufacturers like Fender, for example, will often create a one-piece neck and board using maple. Fender tends to fit the truss rod in a slot cut in the back of the neck filled with a piece of walnut wood – aka the skunk stripe.

Other manufacturers, e.g., Music Man, use separate pieces of maple for the fretboard and neck.

Because maple is dense, hard and thinly grained it produces a zingy snap to the sound of a guitar. The density of maple also gives you good sustain. Maple fretboards may be ‘finished’ and lacquered or unfinished. During the winter months when humidity is low an unfinished maple fretboard can be known to shrink. 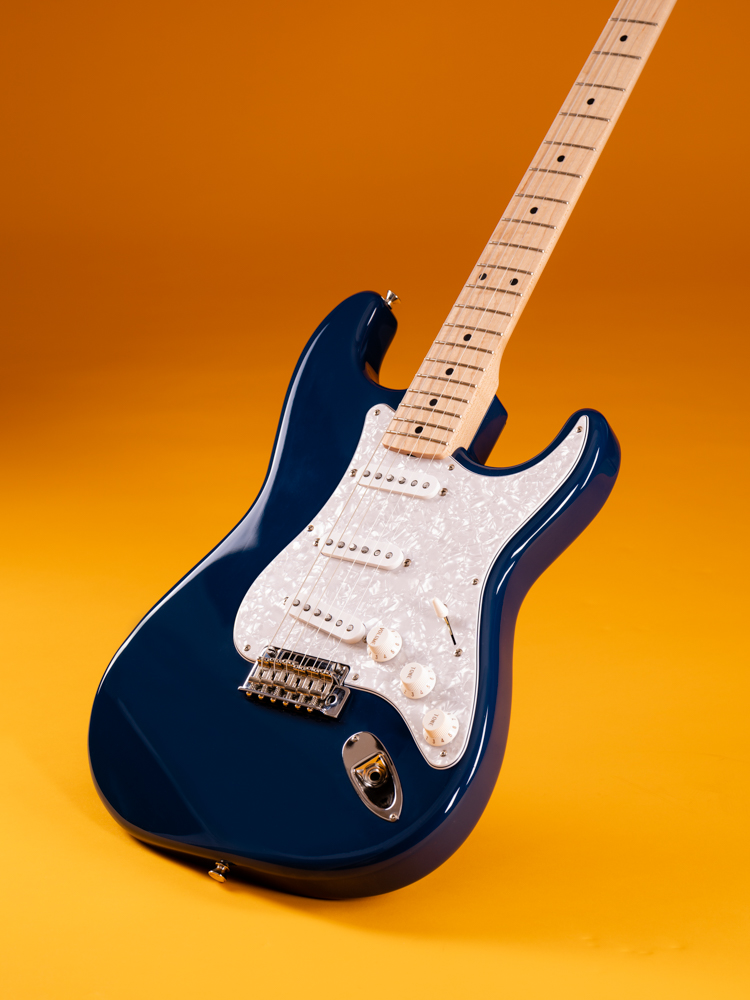 If you’ve opted for an unfinished fretboard, you need to oil it regularly with a fractionated coconut oil. This won’t discolour the board and, because it is fractionated, it won’t become rancid on the board and smell unpleasant. What it will do is prevent shrinkage and stop the fret ends popping out of the side of the board or the frets lifting. Unfinished maple boards can hold onto dirt and look grimy. Take a look at Eric Clapton’s Blackie guitar and you’ll see the patina that unfinished maple gets with age and use. 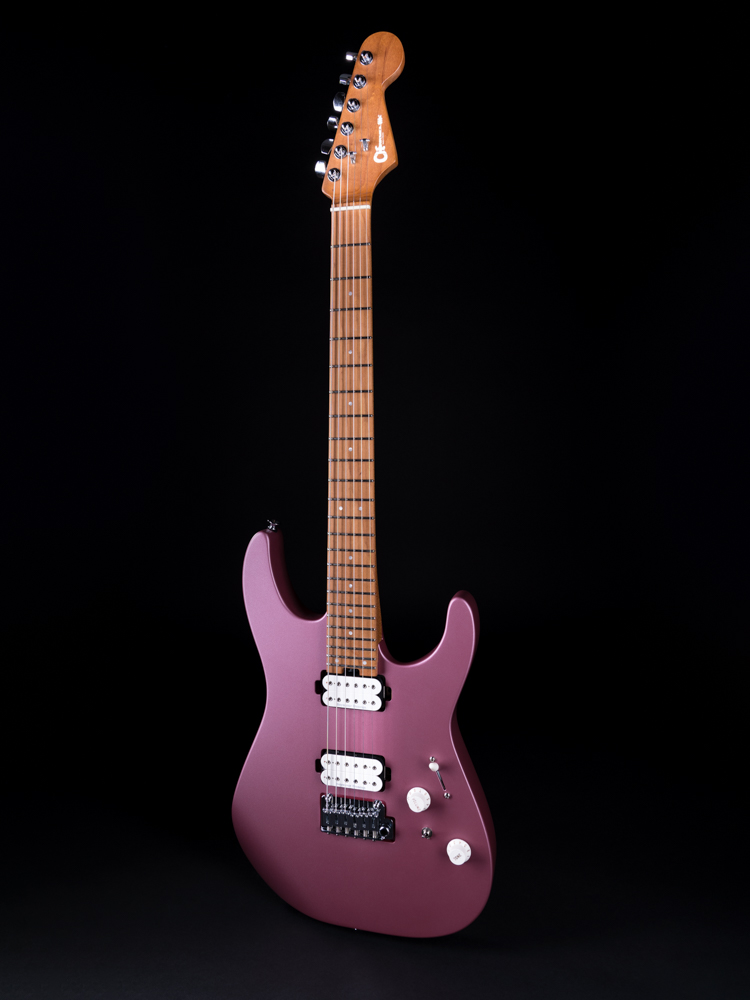 You can also buy roasted and caramalised maple fretboards. The roasting process stabilises the fretboard so changes in humidity affect it less. It is said to take away the zing a little and make it sound more like a rosewood fretboard (see later). As maple can look a bit sad and anaemic the process makes it darker in appearance and, to some, more appealing as it highlights grain and figuring. You can use lemon oil or similar to clean and condition a roasted maple fretboard. Roasting, baking, cooking and caramelising are all essentially the same thing. 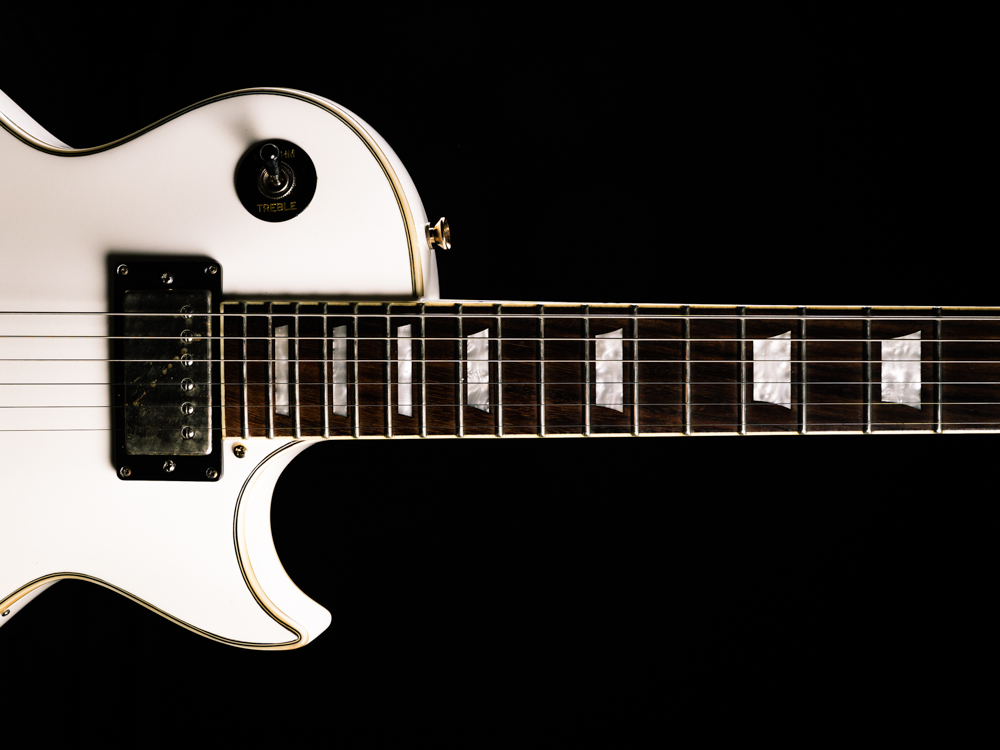 Historically fretboards used by guitar manufacturers were made from Brazilian rosewood. This is rare and expensive nowadays and CITES means that you must have a certificate to say that the tree was felled before 1982 to use it. Or, of course, that a guitar has a serial number before 1982 to have it used in its manufacture.

Indian rosewood is probably the most commonly used fretboard material today. It’s a medium density wood that gives a warm, soft sound while offering good sustain. Dark brown in colour, Indian rosewood has a natural oiliness which it makes it less susceptible to shrinkage. All the same, you still need to clean and condition it and that’s best done with an oil.

Lemon oil is a popular choice but I prefer Dr Duck’s Ax Wax (which is an oil not a wax!). All species of rosewood were briefly affected by CITES regulation and use of the wood in new guitars was all but halted. This led to many manufacturers seeking alternatives; we’ll have a look at some of those later in this blog. 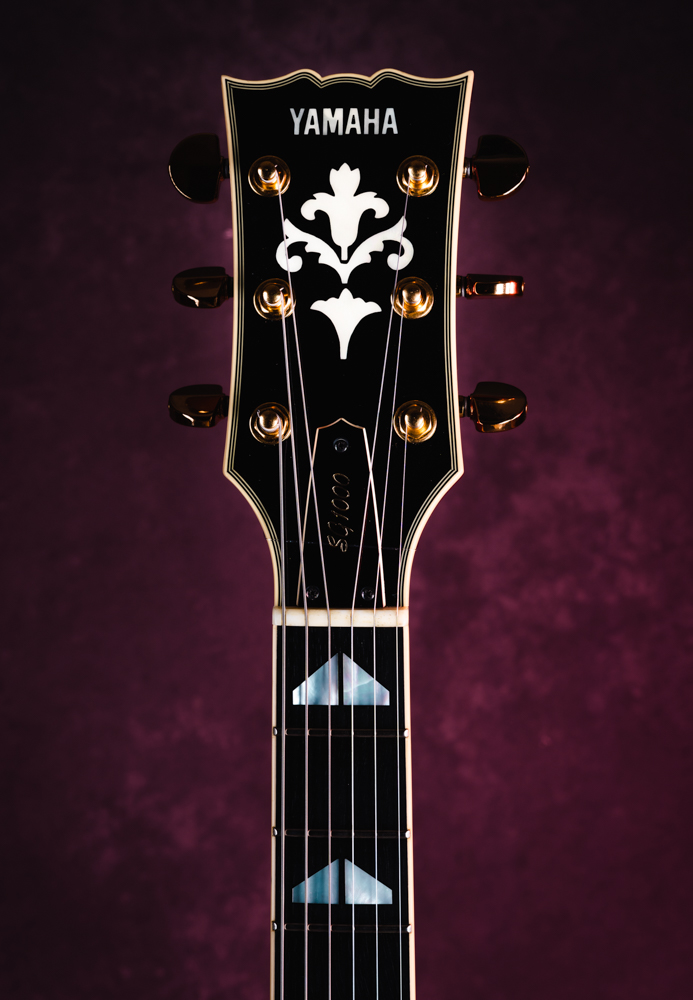 Like rosewood, ebony is a wood that has been heavily affected by CITES restrictions. Ebony is a very dense, hard and smooth tone wood that delivers quite a zingy, clean and balanced sound when used on a fretboard. It is said to be difficult to distinguish between maple and ebony in a blind test. Looks-wise though, in my opinion, ebony is the winner.

Gibson has used ebony extensively in the past but more recently is substituting Richlite – a man-made product with all the best properties of ebony and none of the bad ones (like its willingness to split). Ebony is best oiled like rosewood to clean and condition it.

Wenge is a very open-grained wood that is very hard. It offers warmth and sustain but is (or can be) quite ‘rough’ under the fingers. It is dark in colour and has an almost parallel straight and open dark/lighter brown ‘zebra’ grain. You’re most likely to see a Wenge fretboard on some of the more up market ‘pointy headstock’ guitars.

Pau Ferro is one of the woods whose use has become more prevalent for fretboards since the CITES regulations of 2012-14. To me, it resembles a light-coloured rosewood. It is similar to rosewood in sound, maybe a little less warmth which is probably due to the fact that it is a bit harder than rosewood. Fender uses this wood a lot now.

Clean and feed with lemon oil, Dr Duck’s or similar.

I first heard of Lignum Rosa when it was selected by Trev Wilkinson as the CITES replacement for rosewood on the JHS Brand of guitars, Vintage.

Sound like a made-up name? Yes indeed. Lignum means ‘wood’ in Latin and ‘Rosa’… well I think you get my point. It‘s almost identical to rosewood in every way so a great substitute, the best of the bunch. Treat it in exactly the same way as rosewood as well. 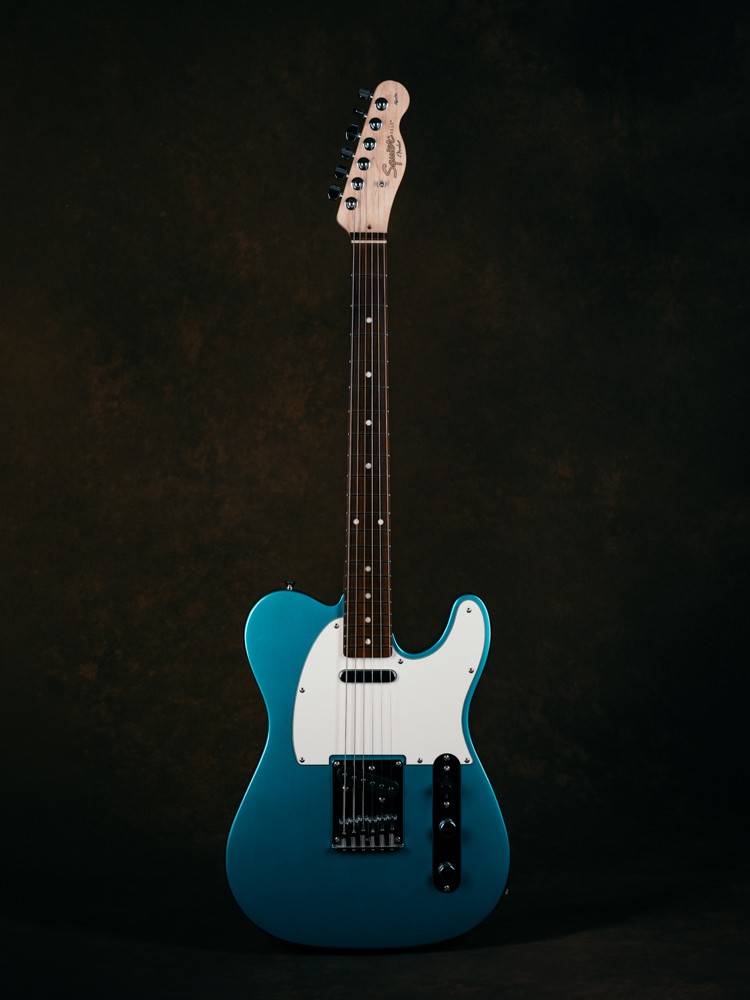 Laurel wood is mainly produced in India and is the less favoured, poor relation to Indian rosewood. However, it has similar characteristics to rosewood and can be as dark in colour. As it is a less expensive wood it is used by Squier for its range of entry level guitars. Snobbery aside it is a good wood touse as a fretboard. Treat it like rosewood.

This is another rosewood substitute. Produced in Cuba it has a similar look to rosewood although it can have a more orange colour to it. Sonically, I think it would be difficult to tell the difference to rosewood. Gibson uses it on some of its Les Paul Studio range of guitars. Challenges with dealing with Cuba through various US political party agendas aside, it is probably more expensive to use in far-east countries than in the US due to proximity.

Richlite is made from recycled paper (65%) and phenolic resin (35%). It is compressed and baked into a super-hard material that is almost indestructible; it doesn’t move with changes in temperature or humidity, doesn’t dent from long finger nails, etc. Sonically, it is indistinguishable from ebony to most ears. It’s used by Martin and Gibson so you can be rest-assured, it’s not a cheap substitute. In fact, it is more costly than ebony.

Its colour is naturally dark black (like ebony), this is natural from the paper and the resin in combination. It is so durable that kitchen counter tops, skate boards and a whole range of things have been made out of it for 70-75 years. It’s tough to glue Richlite so it has to be fixed to the neck of the guitar with epoxy glue. That’s a nightmare if the board ever has to be taken off but that’s a rare thing and probably best left to very experienced and suitably tooled luthiers/guitar techs.

No need to feed Richlite of course. A regular guitar cleaner is great.

I hope I’ve given you an insight into the range of tones you can get with the different materials. Just remember to oil unfinished woods with fractionated Coconut Oil for maple and lemon oil or Dr Duck’s Ax Wax for the rest. Keep finished (lacquered) fretboards or Richlite fretboards clean with regular guitar cleaning products. And don’t forget to keep your frets clean and polished too.

For information on BBZ guitar services in High Wycombe and Buckinghamshire click here.

Follow us on Facebook or Twitter for news and offers from BBZGuitars. If you’ve got any other questions about guitars, why not apply to join the BBZ Guitar Fix Group on Facebook and pose your questions in the group.

Why do you need to setup a guitar? 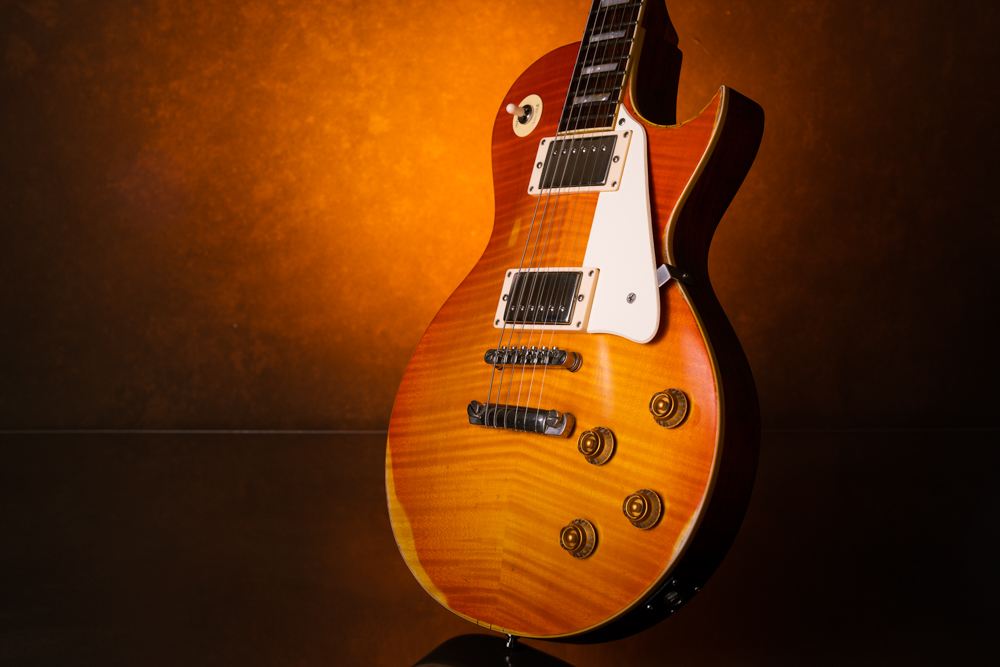 Affordable ways to customise a guitar 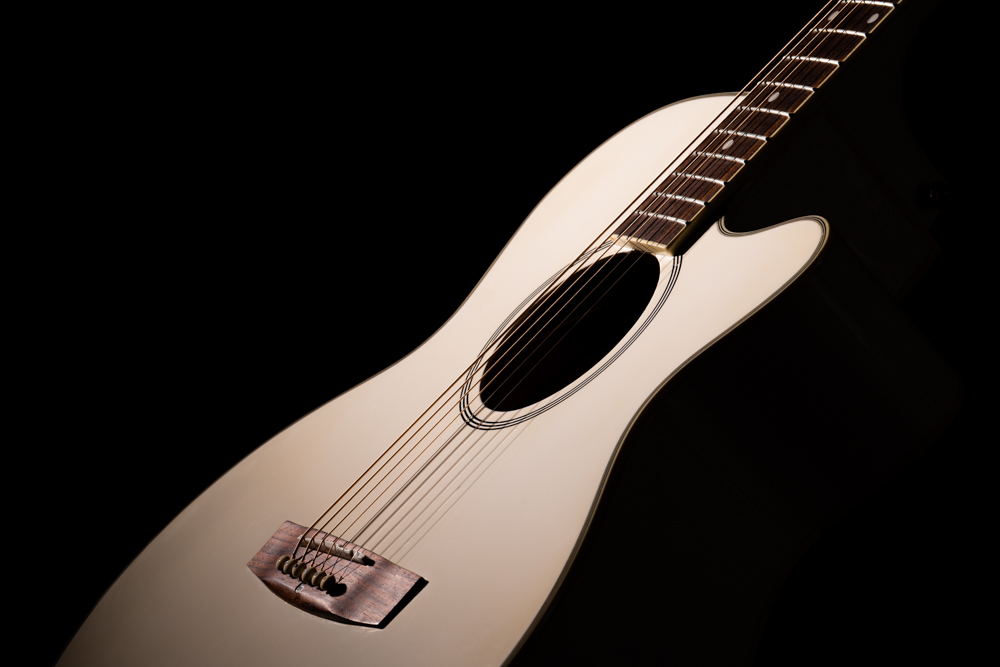 How to prepare your guitar for a Bridge Doctor 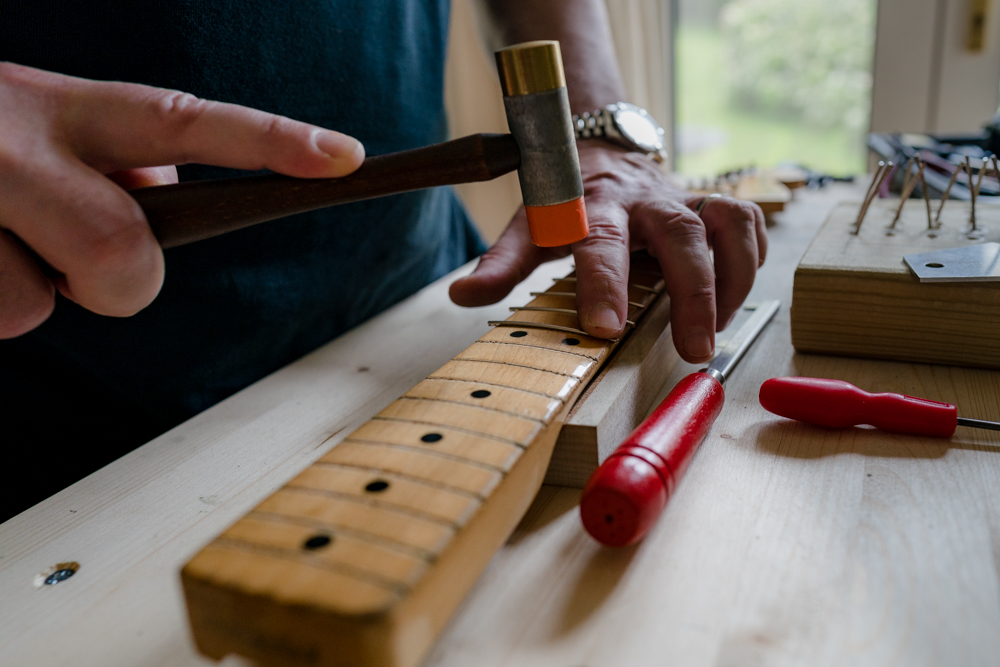 How to refret a guitar